They were rotted and needed to be removed right away! But where to find new ones. And if we can find new ones, how do you remove them, or replace them? Once again we had no idea what we were doing. But that has never stopped us before. 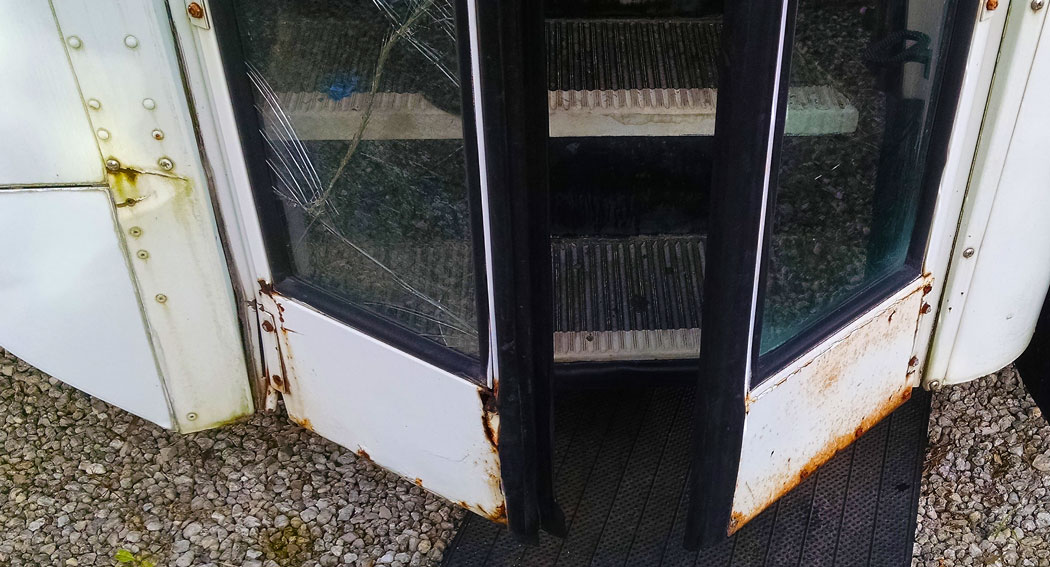 Days and weeks of scouring the internet had turned up nothing. It turns out not many people are selling doors for 22 year old school buses. Then I get a call from my father. He and my mother were returning from a trip to Orlando. As they drove down state road 27 they passed Ole South Auto Salvage in Venus Florida. They saw a line of school buses way in the back of the junk yard, sorry, I mean salvage yard. 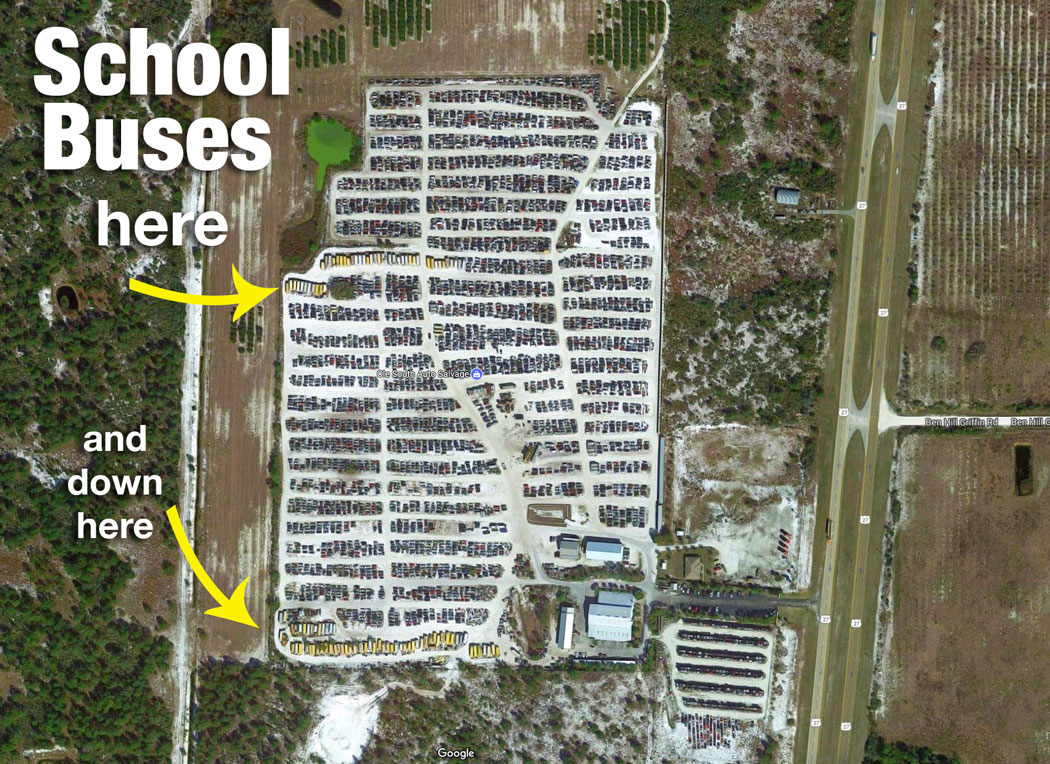 I called them and asked about the school buses. They said they usually don’t sell parts off them. But after a lot of discussion (and yelling to Harry on a walkie-talkie) it was agreed that I could buy a set of doors for $100. About a week later Ester and I packed the pickup with tools and took the 50 mile trip to Ole South Auto Salvage. Little did we know the tools would be useless.

When we got there we were told they don’t usually sell bus parts. I explained I had already had this conversation and that I was told I could buy them for $100. They wanted to know who exactly told me this? I said, How do I know, whoever answered the phone!! Well, this once in a life time request for school bus parts caused quite a stir. I kept saying, “Harry said they would be $100”. But of course Harry doesn’t answer phones so they didn’t believe me. Finally, after 20 minutes of grumbling they got Harry on the walkie-talkie. I didn’t hear the whole conversation but I did hear him say, “Yeah, tell him $100 and no returns”. Finally Harry has spoken!

Then came the second problem, we are not allowed to go out back and get parts. I had measurements of the doors but there is a lot more to a bus door than just measurements. Thankfully Harry came to the rescue again telling them I could ride along but could not get out of the junk yard, sorry, salvage yard Jeep. We jumped in the Jeep and took off. It was a Jeep Grand Cherokee that looked fairly nice but sounded like there were no wheel bearings left. As we squeaked and ground our way through the yard I scanned all the buses. None looked correct.

Row after row of buses with missing doors, broken doors, rusted doors, I was starting to get worried. It didn’t help that the guy driving had a wondering eye and kept referring to me as, “You people”. I was hoping he meant “customers”. We were on the last row of buses with just a handful left to check when I saw something. It was the only International bus I had seen. It was not they same style as ours, we have a conventional and this was a Vista. But the doors looked right. Good old Wandering Eye jumped out and checked the measurements while I climbed around the inside of the Jeep trying to get a good look at them. The measurements were correct and I said, “I’ll take’m!” and off we rattled to the office.

It was another 45 minutes before a Mad Max looking old welding truck pulled up front with our bus doors in the back. Ester and I helped the mechanic get them into the back of the truck. He even grabbed the connecting rod from the school bus for us. He was the nicest guy there and I don’t think he spoke any english. 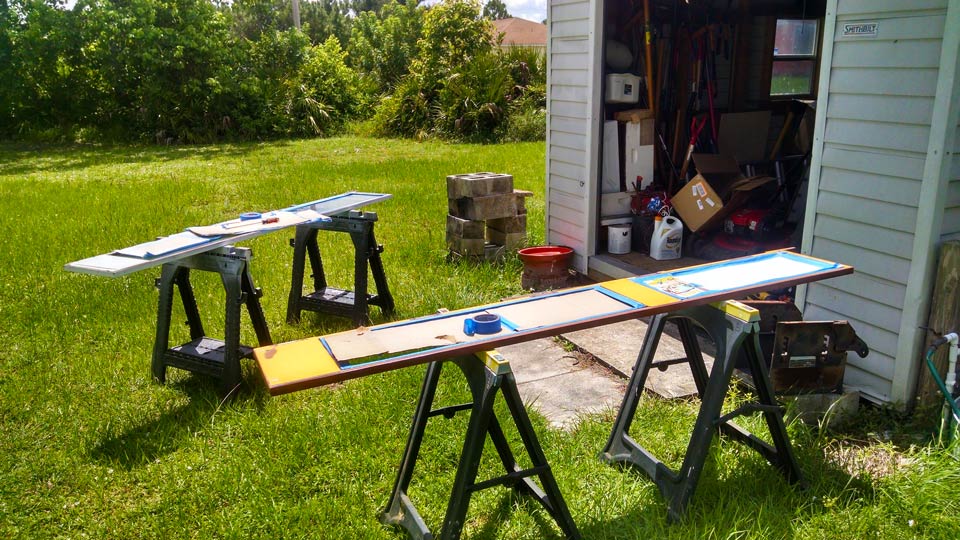 Sure, the doors might have sat around the shed for like, maybe 11 months? But hay! we had other projects to finish first. The doors are totally rust free with good glass and door seals. The only problem was they were super sun baked school bus yellow. So we washed, sanded and painted them with a few cans of Rust-Oleum gloss white. They came out better than I had hoped. 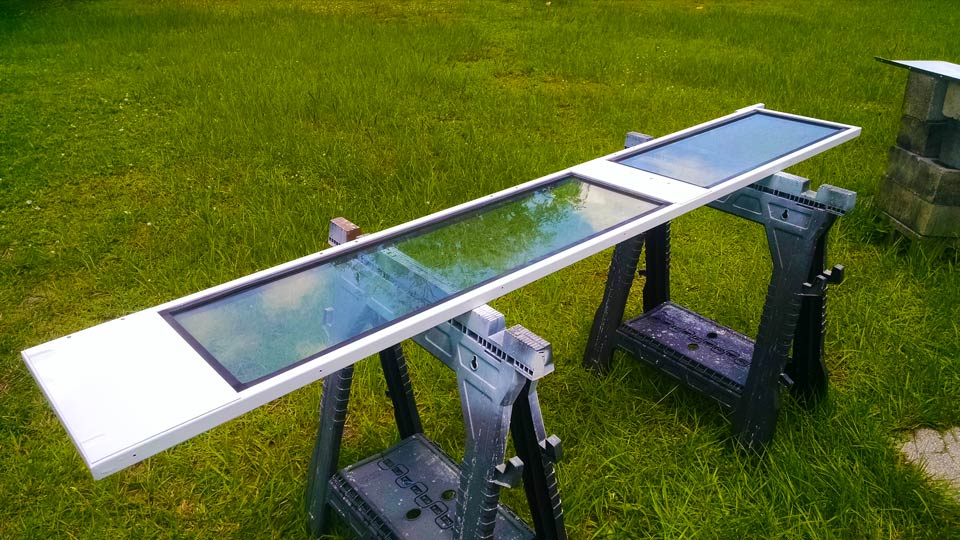 Painting them was a bit tricky. This time of year it rains everyday. So painting was done with one eye on the clouds. More than once they had to be rushed back into the shed. 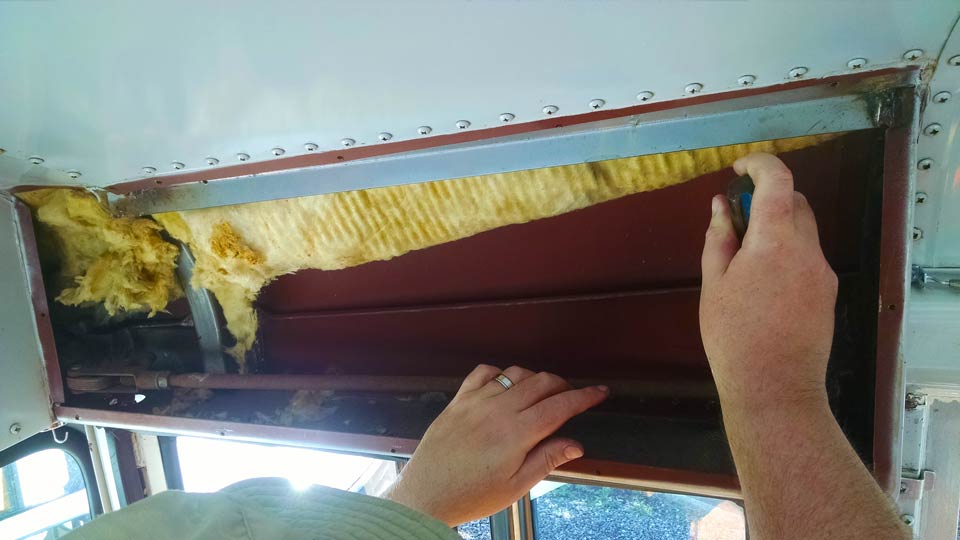 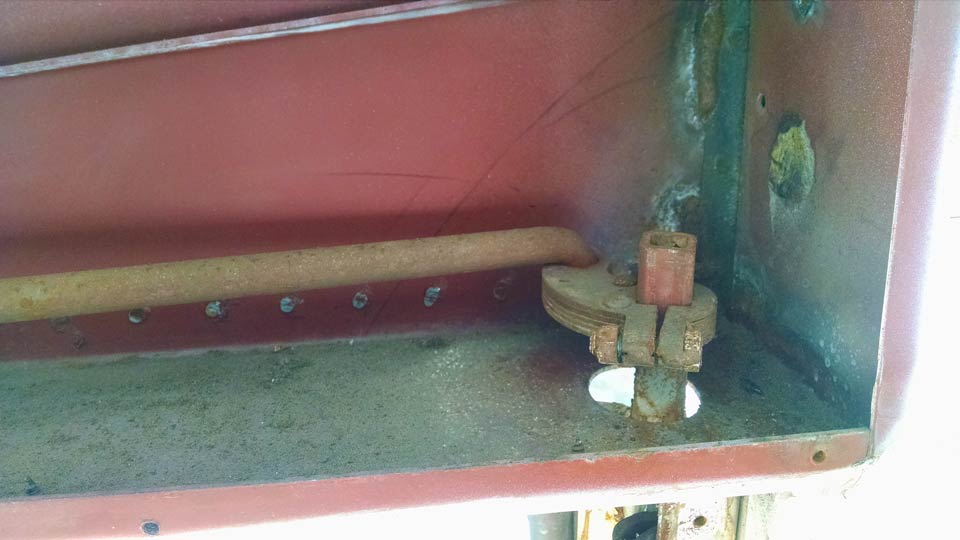 We have no idea what we are doing, so we just take stuff apart. We started with the connecting rods over the doors. Our bus doors open outward and they are connected by a rod that is above the doors. Once the panel was off it was not too hard to muscle the rod off the posts. 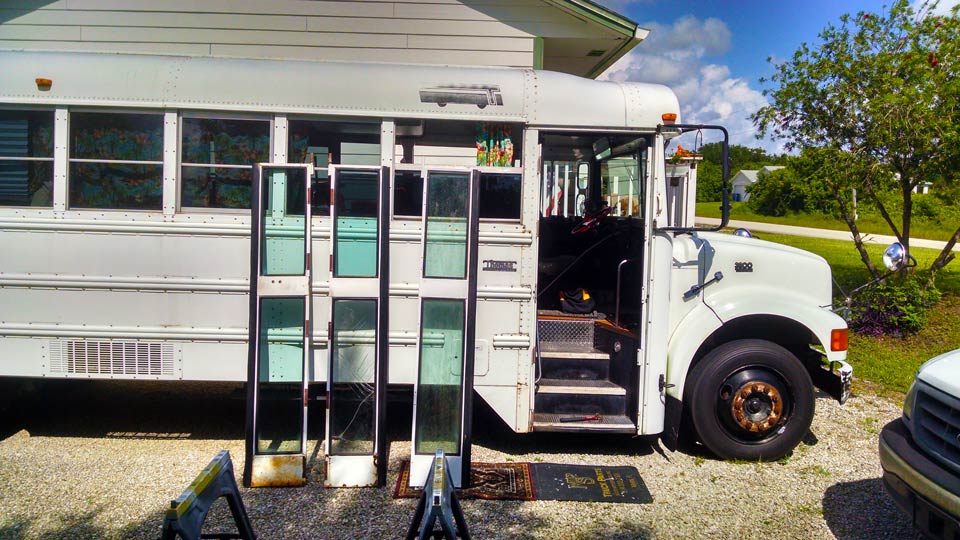 With the old doors off we decided to get new hinge bolts and nuts. That is standard fair when working on a bus. Every project requires at least one trip to the hardware store. Ester retuned with bolts a tad bit too short, but the new nuts worked fine. The door frame had been damaged before we got the bus and that was the reason the glass was broken. Jeff the welder fixed the door frame when he installed the tanks for us. 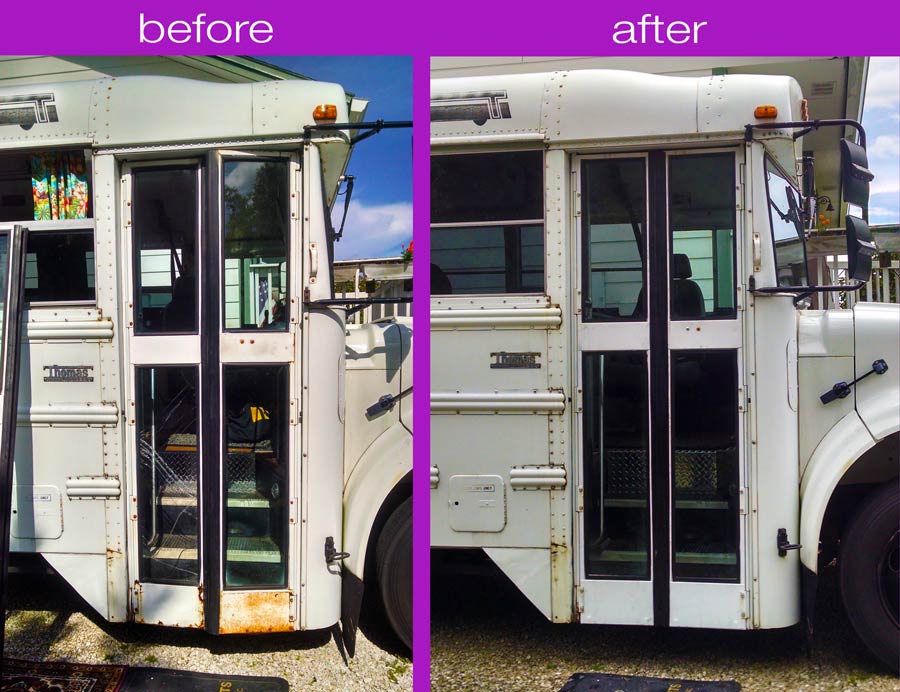 With the old doors off and the new doors installed the bus looks great. No more broken glass, no more rust falling out every time the door is opened. As with the painting it started raining in the middle of getting the new doors on. But that is par for the course. It took almost a year, a 100 mile road trip, several days of sanding and painting, some cuts, a little blood, a little sunburn, but the new doors are on. Another project checked off our list! 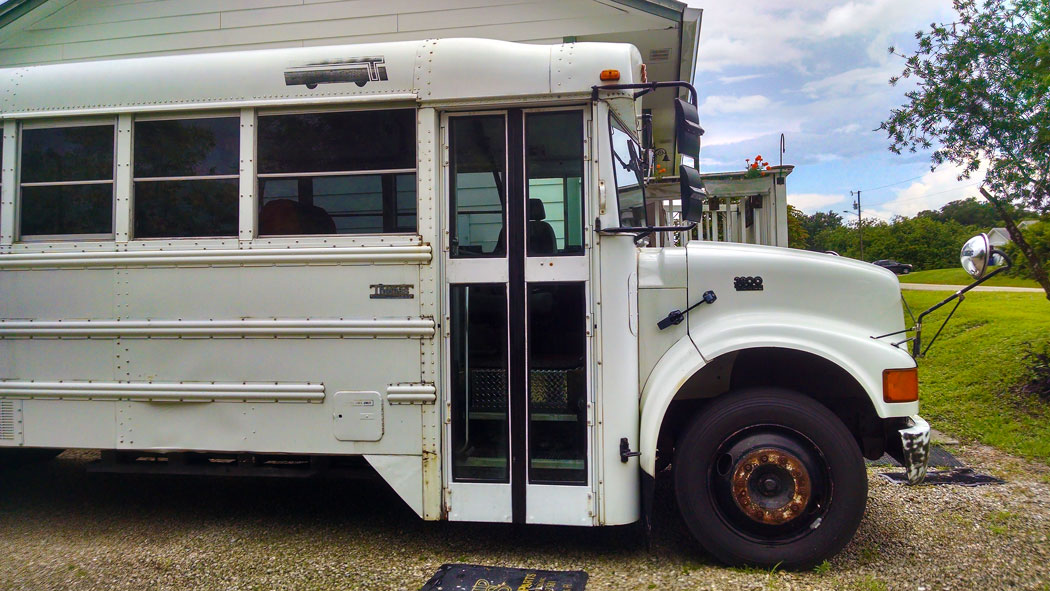 « Yeah, Then We Got A Lithium Battery How to clear International 3800 Engine Error Codes »
comments powered by Disqus