Skoolies Should Have Toilets

We gotta go sometime, just make sure you take it with you when you leave!

Lately I have seen a trend of people building Skoolies and not including a bathroom. The justification for this ranges widely, but it all boils down to ignorance and selfishness. It is wrong, a bad idea and dangerous.

Fastest Way to Ruin it for Everyone

More and more people are living in RV’s. There is a big movement in renovating older RV’s and converting school buses. There is a reaction to this that is not positive. This is the limiting of places RV’s can park over night.

This loss of available places to park is a direct result of people not living up to their responsibilities. People dump trash, they over stay at places, and they generally make a nuisance and spectacle of themselves.

The fastest way to piss people off is to use the outdoors as your toilet. It only takes a few people pissing or shitting where they shouldn’t to ruin it for everyone else. Skoolies often get blamed for shitty behavior because we are viewed as hippie-types and irresponsible slackers.

The Skoolie community has an added responsibility to lead by example. It only take a few jack-offs shitting on the side of the road to give us all a bad name.

There is no excuse to NOT have a bathroom

If you build a Skoolie the investment in money, time, and materials needed to build a bathroom is a fraction of the cost of construction. A good composting toilet will run $1000, but when you compare that to $2600 for tires, or possible thousands in engine work, it is actually one of the cheaper things. 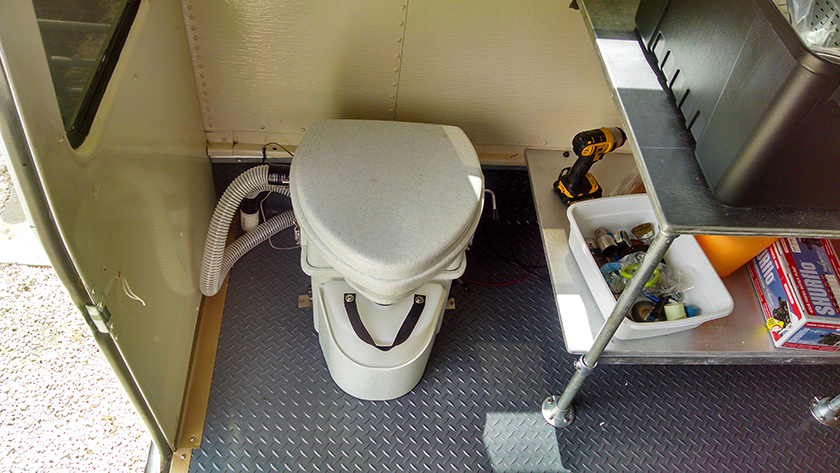 The whole point of a Skoolie is to be self-sufficient, off the grid. If not then why build a Skoolie? If all you want is a place to sleep, buy a van. A Skoolie is big, uneconomical to drive, slow, expensive to maintain. Why drive such a big and cumbersome vehicle and then shit in the woods?

It makes no sense to build a Skoolie that has all the conveniences of home except a bathroom. If you include a way to store, prepare, and cook food, then you need to have a way of dealing with food after you’ve eaten it.

A bathroom doesn’t need to include a shower. Whether you bathe at all is your business. Your personal level of stinky-ness is up to you. Your funk follows you where you go. It is your piss and shit that you leave behind that I don’t want to hike over, or picnic upon.

Shitting in the Woods is the Height of Narcissism

If your plan for living or vacationing is to use the outdoors as your toilet you obviously don’t give a shit about anyone else. Naturally there are times when an emergency arrises and there are no alternatives. But if your plan is to shit outside, go fuck yourself. Why do I, and everyone else have to deal with your inability to plan?

This isn’t the 1800’s, there are standards that we should all aspire to. The least of which is to take responsibility for our own waste. The proper handling of and disposal of human waste has allowed human society to flourish. Reverting back to when everyone did whatever they wanted, wherever they wanted is idiotic and dangerous.

Having a Bathroom Is a Health & Safety Issue

Your shit and piss is not something that should be treated lightly. There are serious health issues involved. There are very important reasons we all don’t just shit in the woods or piss on the street corner. Ignoring these facts is a very dangerous thing to do.

Not Having a Bathroom is Extremely Short Sighted

Everything is not roses and unicorn farts! If you have a Skoolie for any length of time you know things happen. And just like your bus, you are going to break down from time to time. Your adventure on the road can be severely hampered by one bad meal, an off shrimp, or a poorly washed head of lettuce.

What are you going to do when you have to shit every 3 hours and you are on the road? You can’t park at McDonalds over night. It can be hard enough finding a place to legally park, let alone parking with access to a 24/7 bathroom.

If you are out in the woods, well that will be no better. Try shitting in the woods at night, in the rain, or the snow. That is a great way to turn food poisoning into the flu. If you have a Skoolie your motto should be plan for the best and prepare for the worst.

You should travel with a tool kit, extra fuses, flash lights, extra coolant and oil, a tow strap and a place to put your shit (literally)! 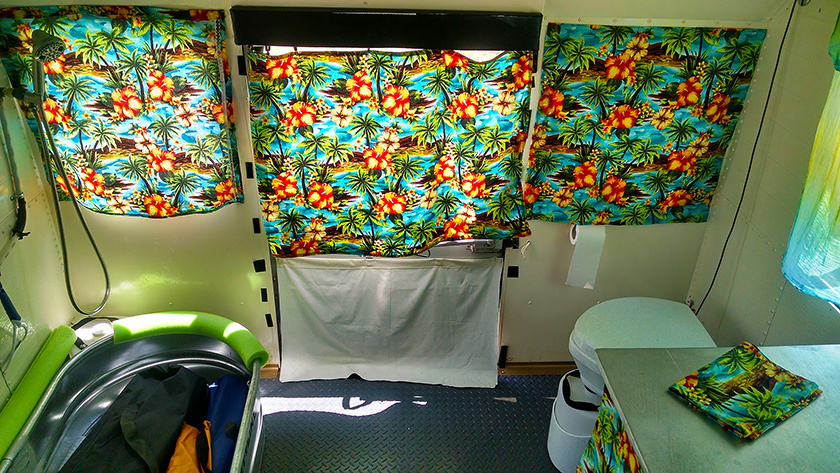 Bottom Line on Your Bottom

When you travel you should be taking only pictures and leaving only foot prints. You pack-out everything you pack-in. Being responsible for your waste, however generated, is part of the spirit behind building a Skoolie. Recycle and reuse, making the most of what you have, and not just having the most. Living simply and healthily. 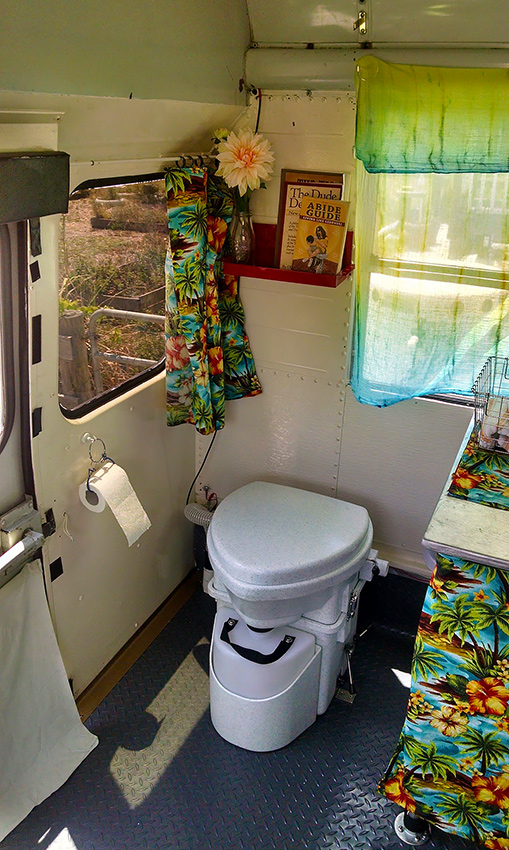 It is not being a free spirit, or doing your own thing, to NOT have a bathroom in your Skoolie. It is irresponsible, shortsighted, dangerous, narcissistic, and ultimately will ruin a good thing for everyone.