Rolling is fun with family and friends – rolling paint that is.

Rust-Oleum paint is fine for painting a Skoolie. However there is a lot of differing information out there about how to go about it. Painting a Skoolie is not rocket science.

Our Skoolie is a 1995 and it spent the vast majority of its time in the Navy, stationed in south Georgia. We live in southwest Florida so the roof of our bus has seen plenty of sun.

Because the bus was in the Navy it was originally white. We are happy to keep that color on the roof, all our vehicles are white. It is a must in our book to keep things as cool as possible in the summer. White is a hard color for a vehicle as it shows all the dirt. But we are willing to trade that for a cooler vehicle.

Over the years the sun has turned the roof paint to chalk. Couple that with some surface rust and a few rusty rivets and it was time for a paint job. We got estimates from a bunch of places. The cheapest was $4000, just for the roof! The most expensive was $6000 to Line-X the roof.

Line-X would have been great for sealing the roof and giving a little thermal protection. But we were told that white Line-X was possible, but it not recommended. They suggested using a color, any color other than white. Another reason we didn’t go with Line-X was that it has a definite texture. Washing the roof of the bus is hard enough without adding texture to the mix.

Southwest Florida is hot and wet. By the end of the summer the bus, the house and my truck are all turning green. Coming from New England growing algae on a vehicle was never an issue. The texture of Line-X was just going to give a lot of small places for our bus to turn green.

Painting a Skoolie with a Roller

It was decided that we would paint the roof ourselves. Further research, and looking at the bank account, resulted in the choice of paint. One gallon of Rust-Oleum in bright white. We got some rollers, cheap brushes, pan liners, tape and sandpaper at Home Depot and we were off. 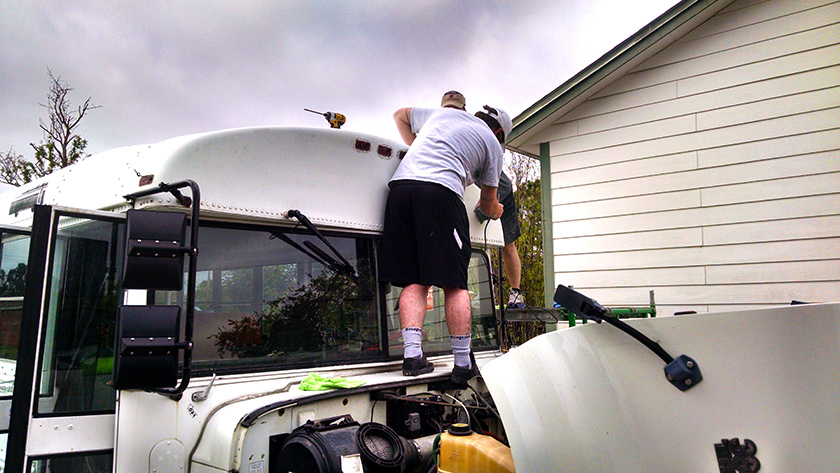 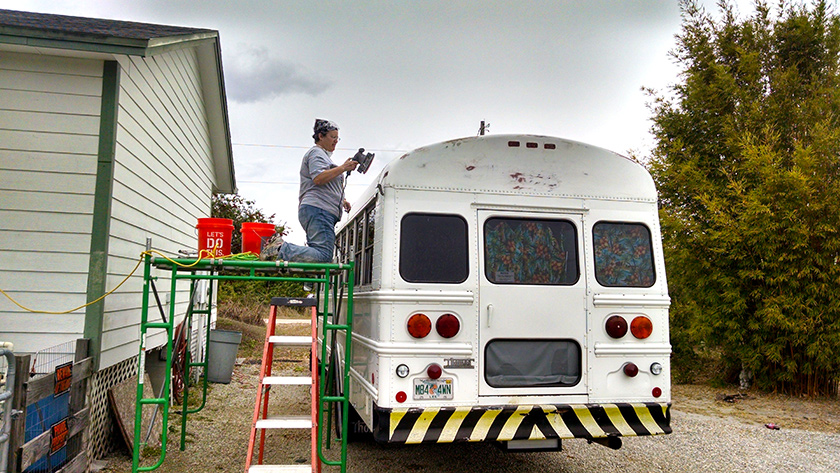 Two people sanded while one person (me) removed all the marker lights. I had purchased all the marker lights (orange & red) and LED bulbs off Amazon. This was the perfect time to install the new lights. The roof paint was mostly chalk and sanded off easily. All we were looking to do was remove the loose stuff. If the sander sat for a second in the same spot you would hit bare metal.

We were promised clear cool weather, what we got was cool rainy days and hot windy days. Working around the weather was a challenge, the plan had to be fluid. The original 2 day plan morphed into a 3 day plan. The best investment we made was renting a section of scaffolding. It was only $50 for a week and it made things much easier. 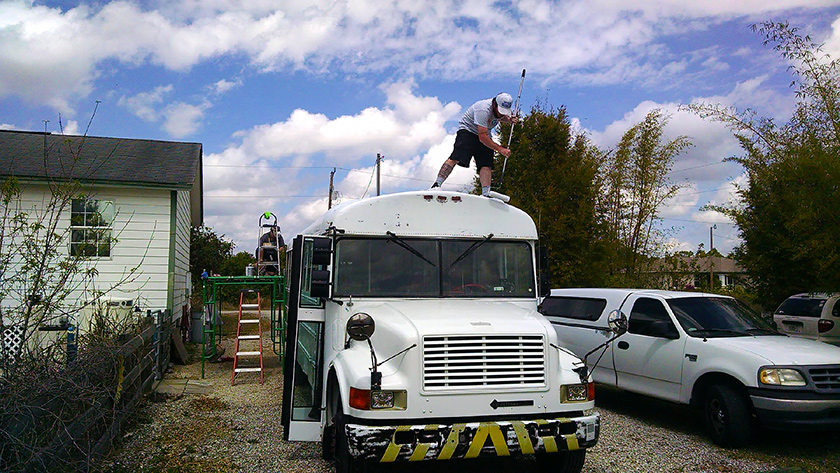 The roof was sanded and then washed with dish soap. The caulking around our emergency escape hatch sky lights was removed and the areas cleaned. We wiped down the whole thing with acetone. Then we started painting.

We didn’t mask off anything! We figured the bus is white, if we dribble white on white who cares. Drips on the glass can be scraped off later. We set the scaffolding up in one spot and moved the bus around the scaffolding. While the scaffolding was great, it took 2 strong people to move it. Over the 3 days we took to paint the bus we didn’t always have the manpower to move the scaffolding. So the bus moved instead.

Do Not Thin Rust-Oleum Paint

The instructions on the Rust-Oleum can states that thinning is NOT required. We were rolling it on, the temperatures were in the upper 70’s with low humidity, so no additives were required. It went on smooth and thick. Because it was white over white it seemed to cover very well. Some areas, bare metal and rusty areas that were treated got 2 coats of paint. The rest of the roof got just one coat. 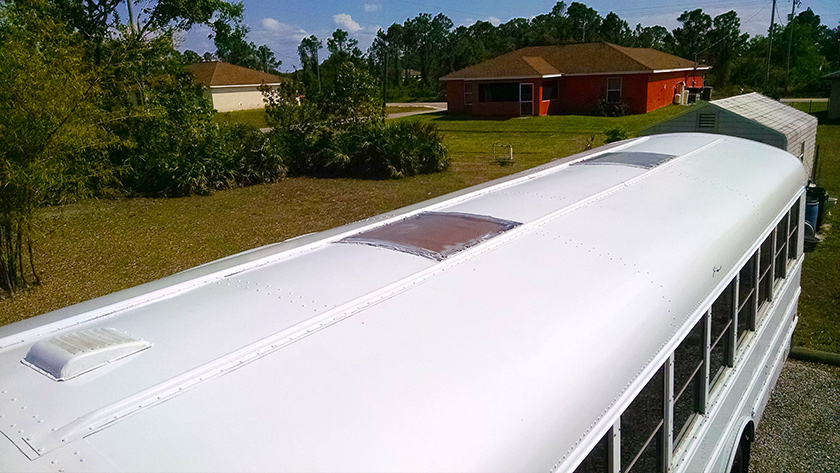 We are amazed at the results. One gallon of paint covered the roof just fine. The finish was smooth, however we could have improved on that with sponge rollers. The paint has a shine and washes clean 1000 times easier than before. The color is not a 100% match to the white of the rest of the bus but we are okay with that. 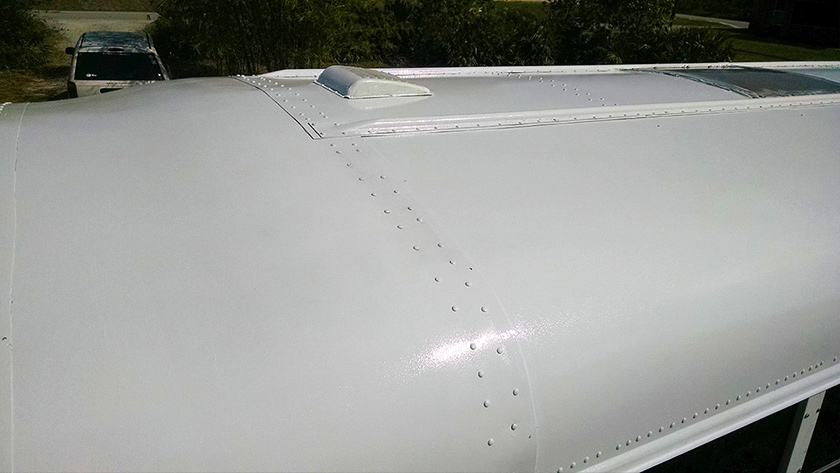 We resealed the escape hatch sky lights with EternaBond tape. Then we installed the new marker lights with the LED bulbs. So far everything seems to be water tight. And the paint seems to be holding up to the sun and rain.