They Will Throw Rocks!

Learning to Abide in an increasingly Violent World.

It seems at times most people are horrible reactionaries. It might be that they envy you or intensely dislike you, maybe both. For some reason owning a bus can bring out the worst in other people. But this aggression will not stand, man!

Let me first state that we live in a somewhat laid back, rural residential area. We are a mile from a Super Wal-Mart, but our block, which has 12 house lots on it, only has 3 homes built. We happen to own 3 lots. Our driveway is almost 100 feet long.

When we first got the bus we parked it in the driveway, at the end, near the shed. It was out-of-the-way, the other cars could come and go easily. It was close to the shed where there is power and all the tools. This apparently made the bus a sitting duck.

About 1 month into owning the bus I was stopped by a neighbor. He told me local kids were throwing rocks at the bus on their way to the bus stop. There is some irony in that I think. He had stopped them and warned them off, but he was sure it was still happening. 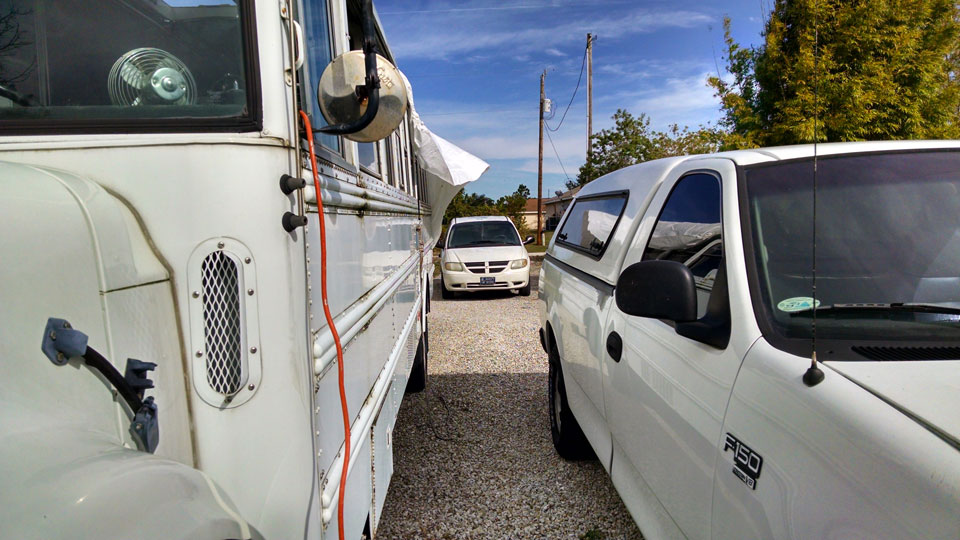 Filled with rage I killed all the first-born children in the town! Okay that didn’t happen, but I might have contemplated it. Ultimately it was decided the bus needed to be moved. At the time our work schedules had us leaving the bus unattended only two days a week. We would only need to “hide” the innocent bus from the local vandals for those two days.

The opposite side of the house from the driveway is a cleared and fenced lot with a 12 foot gate for access. We decided to back the bus inside the fenced area, thus using the house as a buffer between the marauding child vandals and the innocent bus.

The innocent bus would not start

We were told the starter or ignition might be bad on the bus. Indeed it took two cars to jump-start it when it arrived. We didn’t have time to investigate and diagnose the problem. The bus needed to be moved, and moved NOW.

A trip was undertaken at 6:00PM, the very same day we were told of the attacks on the innocent bus. We made haste to the local BatteriesPlus store. They had the batteries we needed, at a cost of $360 for all three.

Daylight was fading fast as we arrived back home with the batteries. We took time to photograph the cabling before we removed the old batteries. That was a good thing as once everything was taken apart it got very confusing. It all looked like a can full of worms, or malaria germs. 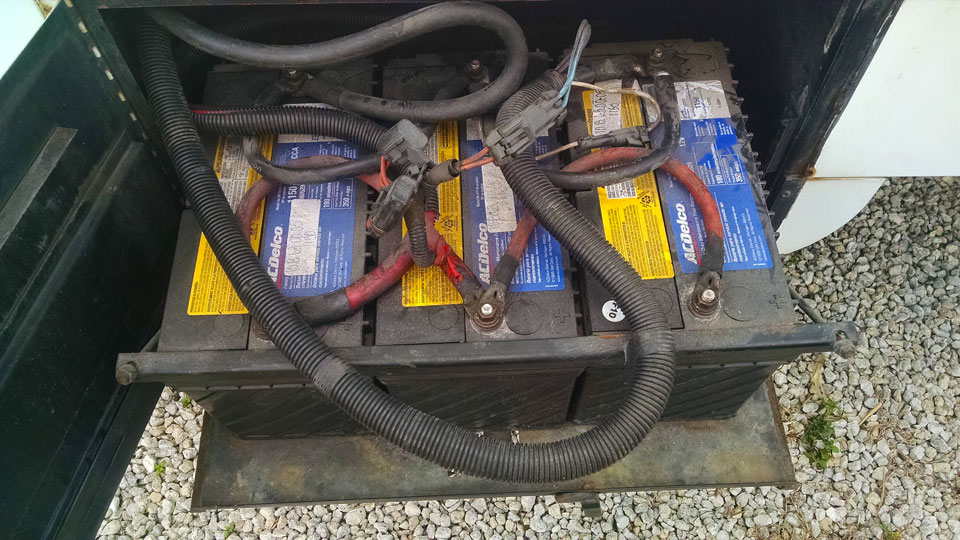 There we were in the fading daylight, hunkered over the battery tray using our cell phones as flashlights. It might have been getting dark but it was hot out. The temperature mixed with the confusion of rewiring three huge truck batteries together was testing our marital cohesion.

When the batteries were finally wired up, darkness had washed over the land. The wife took her position behind the wheel. There was a good chance that despite all our efforts the problem lay in the starter or ignition. Spending over $300 on batteries might have been a huge mistake.

Lights and bells and buzzers screamed to life with the turning of the key. A momentary pause was taken for the glow-plug light to extinguish, then the key was turned further. The engine cranked with unparalleled vigor! It sounded like a giant zipping up his fly and roaring with delight!

Time to play, Hide The Skoolie!

The Beast, I mean Bus was running! We quickly maneuvered it from the driveway to the other side of the house. With the bus now securely locked inside the fenced yard and using the house as a buffer from the assholes that live all around me, we could finally retire for the evening. 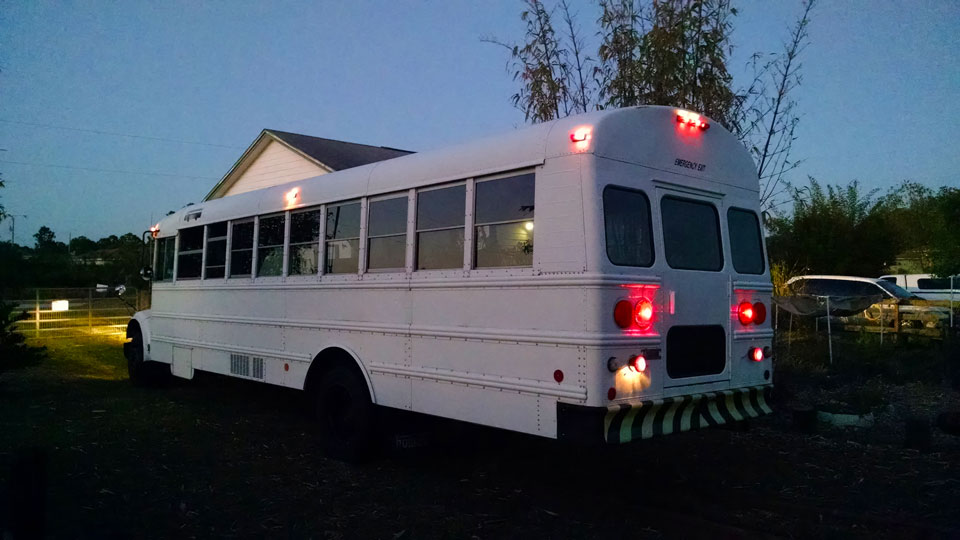 We had protected the bus and everything was cool again. Moving the bus once a week was no chore and it gave us a chance to exercise the engine and transmission a bit. Now we could concentrate on doing the work of converting the bus, that was, until we got a letter from Code enforcement.

« It is always the Small things Code Enforcement vs. A Skoolie »
comments powered by Disqus