It is always the Small things

One second of assumption, 3 weeks of regret!

It is never the things you are unsure about that get you into trouble. It is the things you “know” that will sink your ship. Converting a school bus is filled with chances to make horrible mistakes and assumptions. Each move must be planned out and researched far more than you realize.

This is jumping ahead in our journey a bit so please forgive me for telling a story out of sequence.

After we had removed the seats and pealed up the rubber flooring we noticed something. A stain on the wood around the heater core next to the driver was visible.  This was a clear sign that there had been, at some point, water leaking around this area. The last thing we want to do was install new flooring under a leaking heater system. 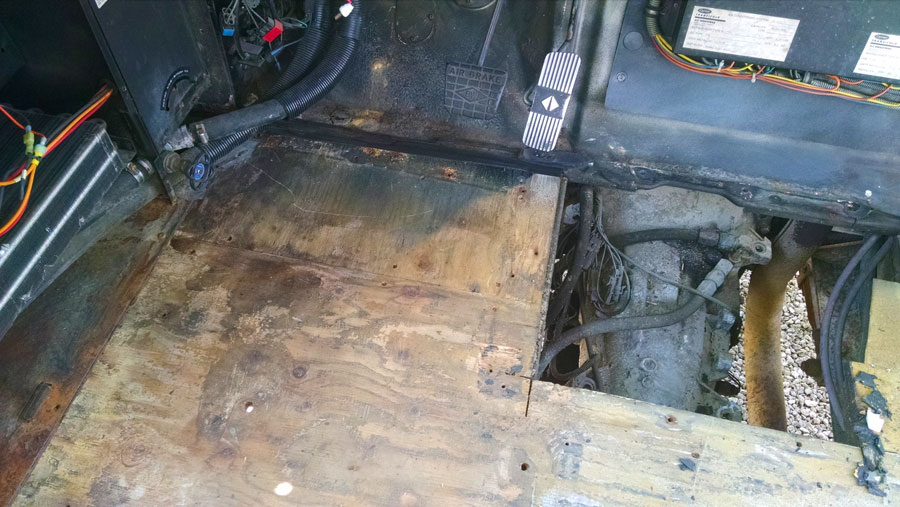 Like with all things bus related I did my research before I started pulling things apart. We run the bus every week for about 20 to 30 minutes. We make sure the oil and water get up to normal operating temperatures. During these maintenance runs I check for leaks. I had not found any leaks but I did notice the heater hoses were old, probably original equipment (meaning they were 20 years old).

The heater hoses that run from the engine block to the heater core in the cabin were standard one inch hose. I called around and found that the local parts stores carry the hose. An average car will have about 3 to 4 feet of heater hose. The bus however has over 20 feet of the stuff. I had to go to more than one automotive parts store to acquire the full 20+ feet I needed.

Once I had all the new parts I started removing the old hose. This task was difficult only due to its size and not its complexity. I noticed the heater core had rubber end caps on it. These caps blocked off auxiliary lines that would be used to feed extra heaters for the back of the bus. Seeing as how this bus was purchased for use at a Navy base in Georgia, extra heaters were definitely not needed. 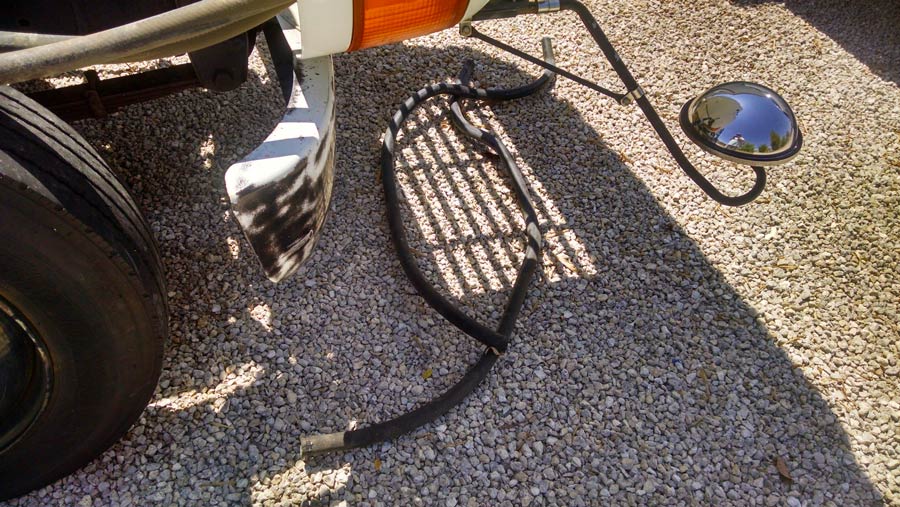 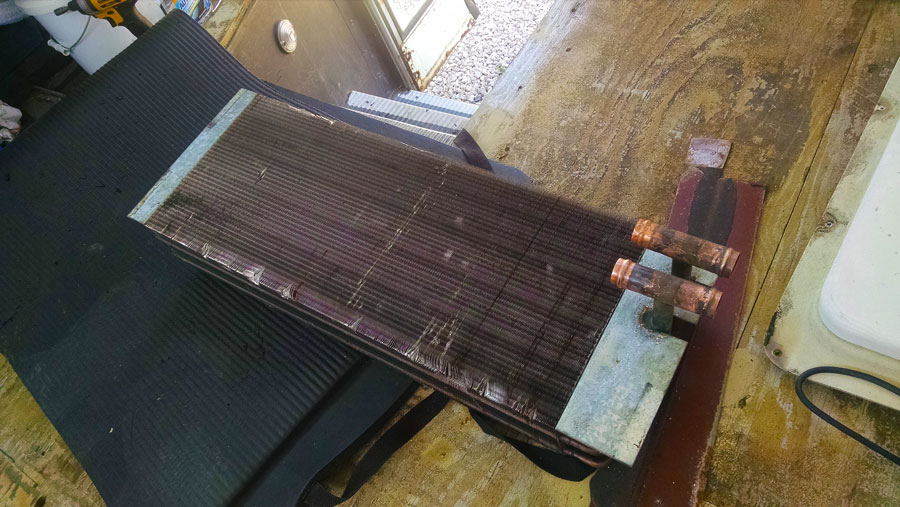 My thinking was simple but deeply flawed when it came to these end caps. I reasoned that since I was replacing all 20+ feet of heater hose I should replace the rubber end caps as well. This would mean a 100% complete heater system upgrade, as far as the hoses go.

It’s amazing how quickly you can get into trouble. It took only a few minutes worth of work and the rubber end caps were off. They were secured so tightly to the copper tubing that I had to cut them off, destroying them in the process. 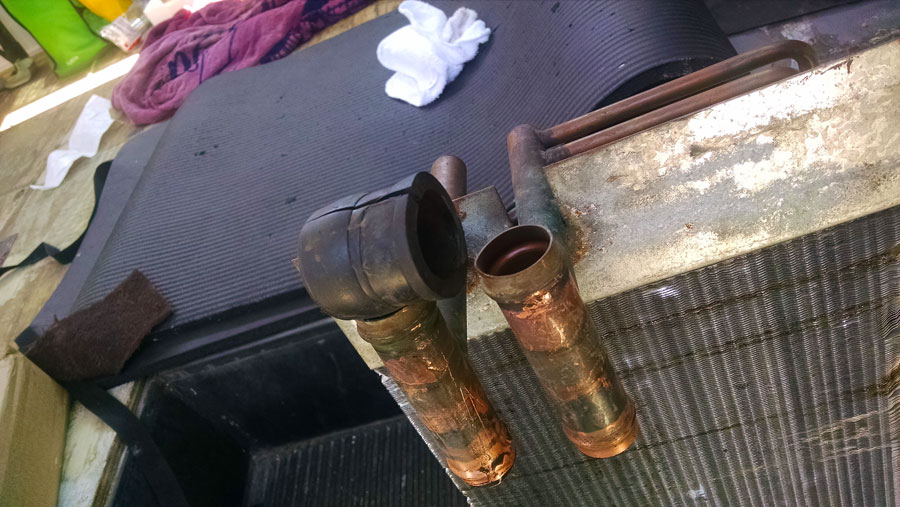 Rubber End Caps Do Not Exist!

These rubber end caps were made of the same “Unobtanium” as the missing escape hatch was made of.

We searched high and low calling and visited every parts store, plumbing warehouse, truck and tractor store in my area. The internet was scoured for any sign of one inch rubber end caps. I emailed and called every possible source locally, and internationally. One inch rubber end caps for heater hoses do not exist.

My incorrect assumption was that if one inch heater hose was relatively easy to find, why would one inch rubber heater hose end caps be any different.  Those were the thoughts that went through my brain as I cut off the perfectly good rubber end caps.

I ended up taking the heater core to a Automotive Air Conditioning place to have them crush and braze the pipes closed. After explaining in great detail what I needed, to several employees, it was decided this was not the correct course of action. To their benefit they told me they were not 100% confident in the strength and reliability of this type of fix.

Ester and I ended up making several trips to every hardware store and home improvement center in town in an attempt to engineer a fix. We figured on a fix that would not permanently damage or alter the heater core would be best. Our eventual solution took the form of a 3/4″ nipples, end caps, more one inch hose and a bunch of clamps. 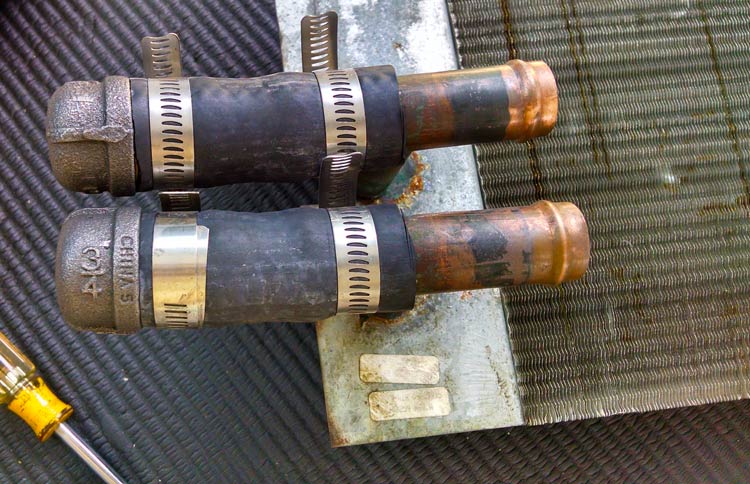 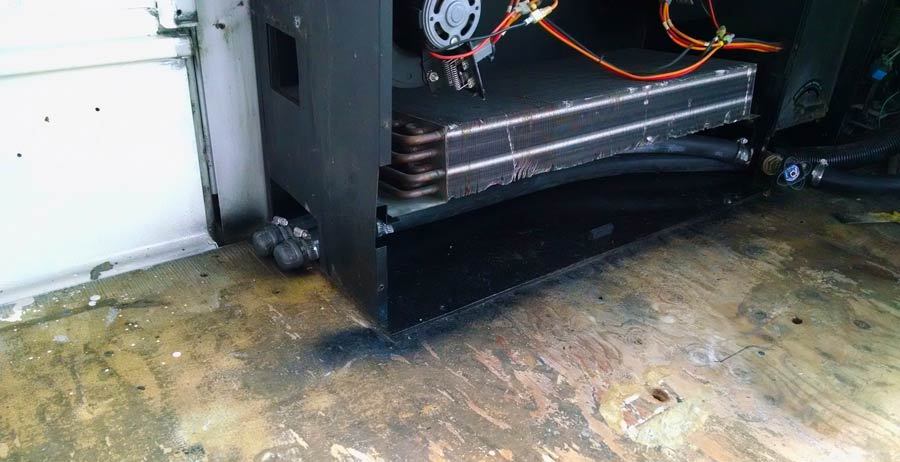 It’s not the most elegant solution but it seems to work. We have run the engine up to temperature and pressure several times and there are no leaks..

This whole fiasco lasted more than 4 weeks and was very exhausting. It may not seem like it but I have shortened the tail quite a bit for this Post. Working on the bus has shown me the benefit of planning, research and measured steps. Most importantly, Think Before You Cut, then DON’T CUT!!!

« What to Know Before Converting a Bus They Will Throw Rocks! »
comments powered by Disqus