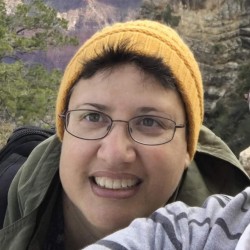 You gotta be comfortable if you wanna enjoy the ride!

The driver’s seat tried to kill me! Okay, well maybe it was not trying to kill me but I did feel like I was being assaulted. The original driver’s seat on our 1995 International School bus was not comfortable.

We raised the seat and mounted it on a swivel pedestal so we can use it at the kitchen table. Having the seat do double duty was key to our current layout. The main problem was the original seat was just not very good. 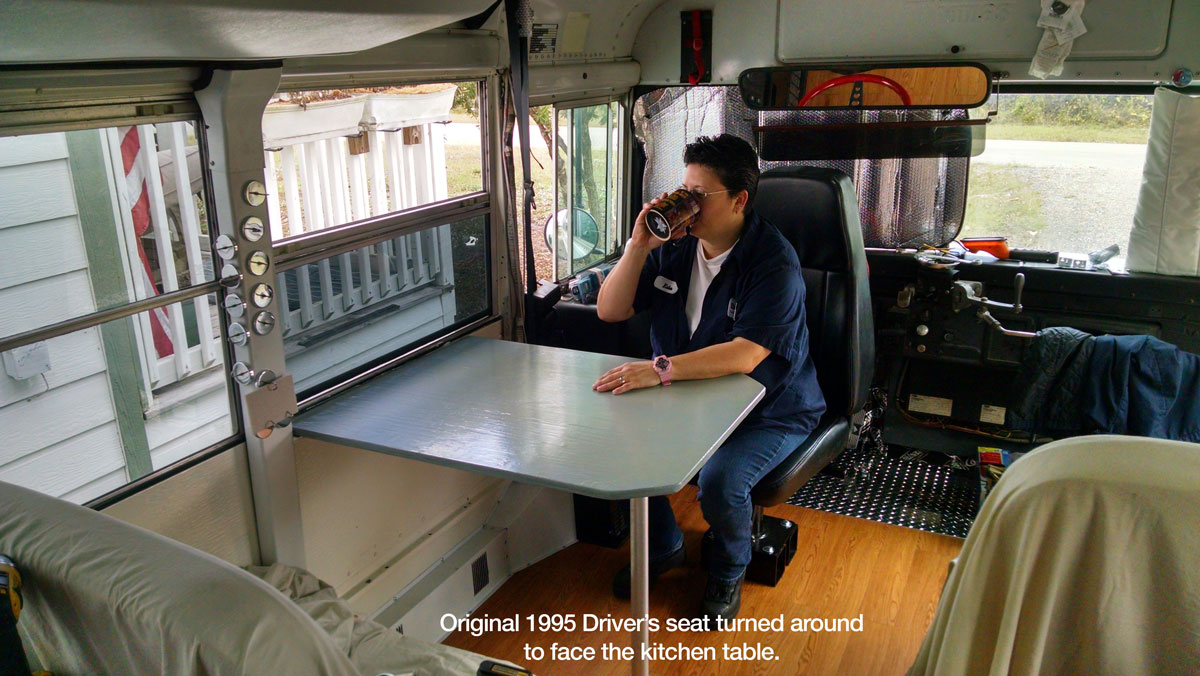 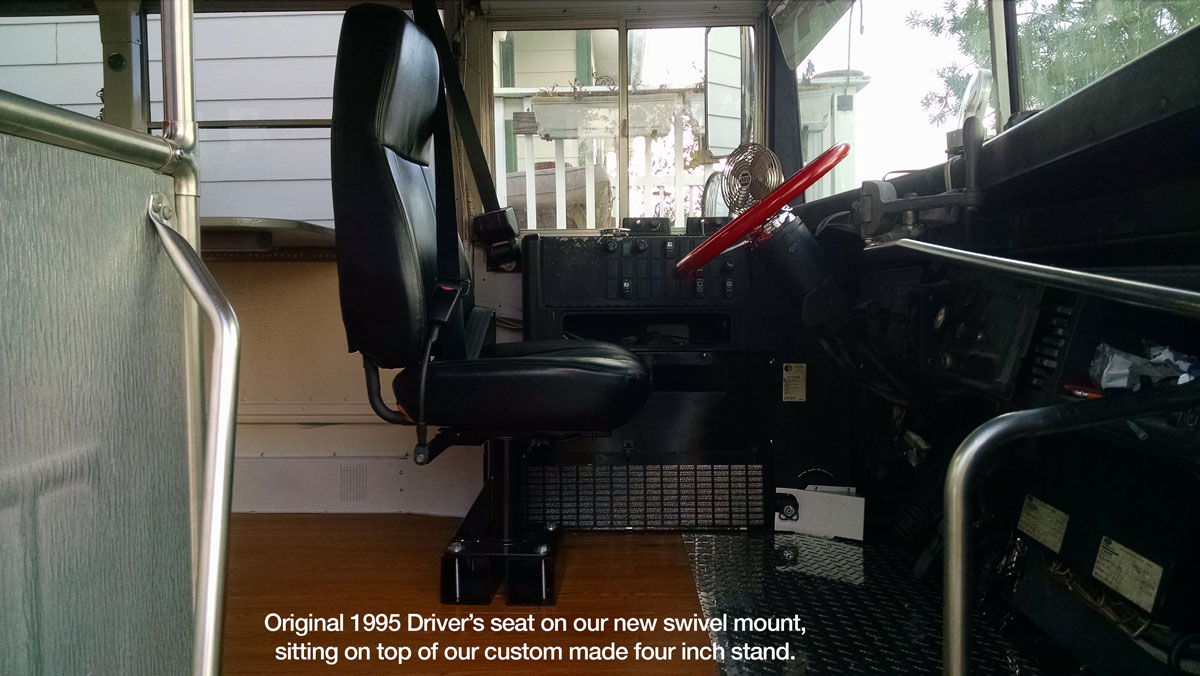 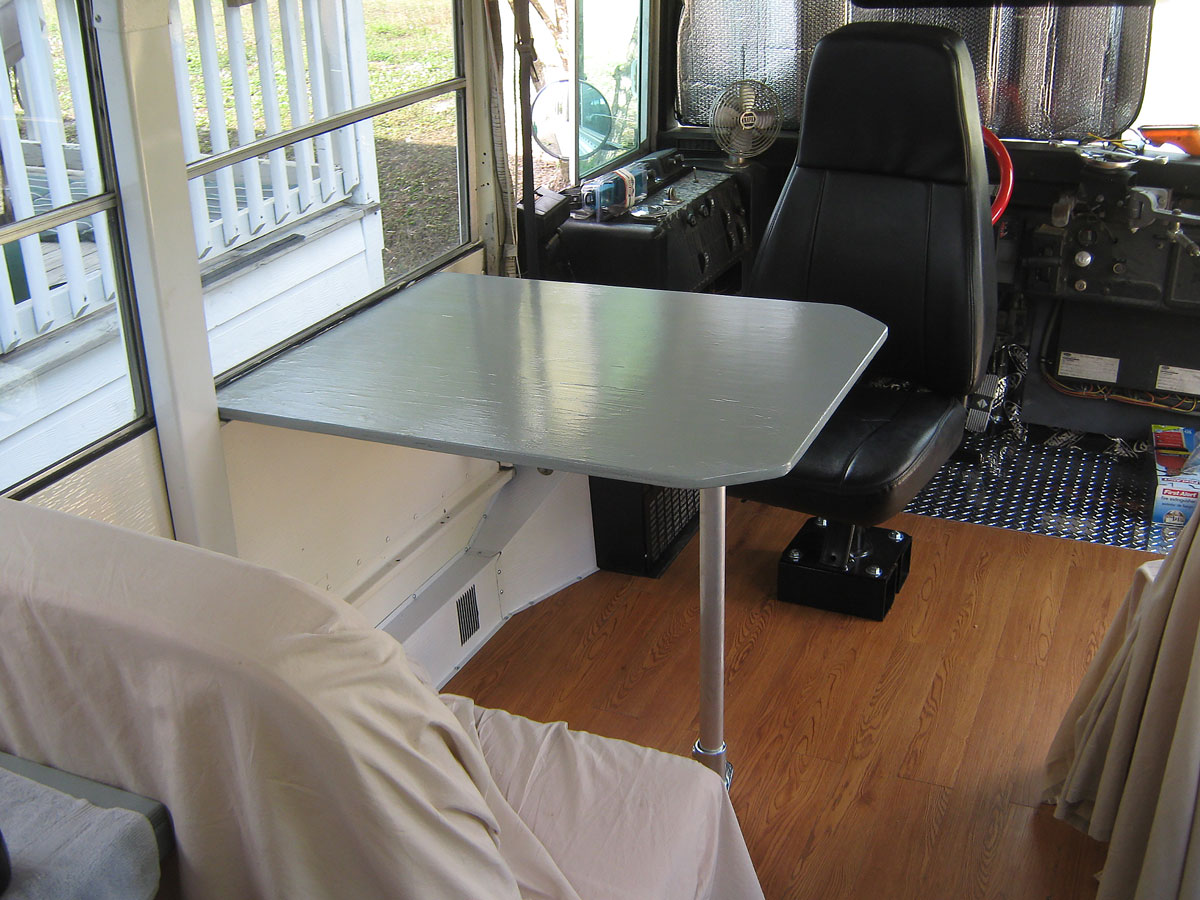 The seat did not adjust and because of it’s shape sitting in it felt like you were pitched forward. While driving it was even worse. You got a feeling like you had to brace yourself against the steering wheel. After just a few miles every muscle in my body felt tense.

We looked all over for a new seat. An air-ride driver’s seat would have been great but it would not swivel. Without the ability to turn around we would need to redesign the bus. So any truck air-ride seat was out.

Craigslist was filled with car seats. The problem is they all had proprietary mounting systems that could not be adapted easily to the swivel. Plus people want crazy money for seats. On top of that the shipping can be as much if not more than the seat. The final nail in this idea was that most people were selling 2 or 4 seats as a set and didn’t want to sell just the driver’s seat. 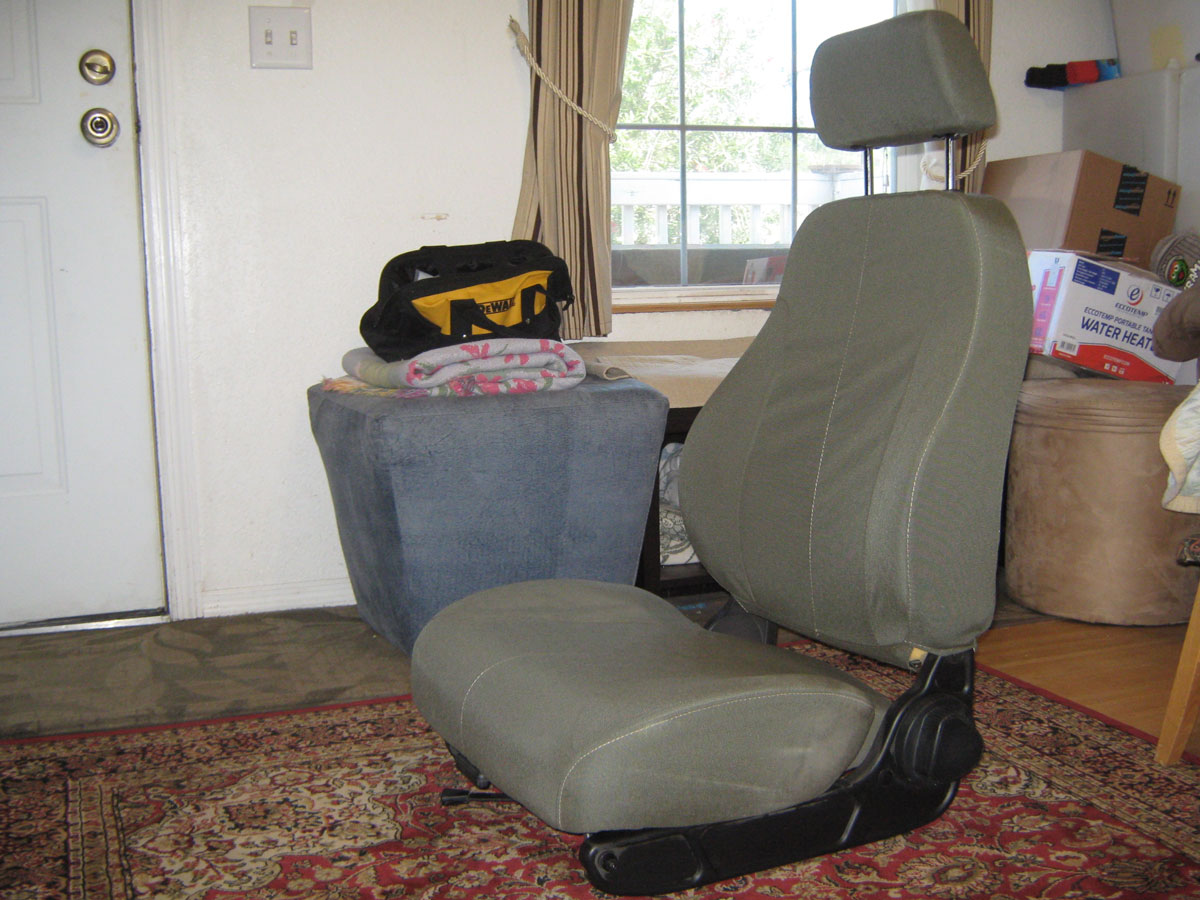 I finally found a seller on eBay that was selling Military seats. The same seats that came in the Humvee. The seats are left-right neutral and they were selling them one at a time. The shipping was an acceptable $68 for UPS ground.

The seats are made by National Seating which makes seats for the trucking industry. They are a good quality company and had the contract to make and sell seats to the military.

The one problem with the new seat was that the bolt pattern didn’t match up with the swivel stand. But that was easily fixed by using a custom adapter plate. At first I got a 14” x 15” plate of 14 gauge steel. But everyone instantly became an expert and insisted the steel was too thin.

I didn’t need the grief so I went back to Woods Metal Works and got a new plate the same dimensions but this time I got 11 gauge steel. I hope everyone is happy now!

We used a sheet of Lexan we had left over from the roof escape hatches and made a template. It worked fairly well and allowed us to make mistakes on plastic and not metal.

Once the template was dry-fitted to the new seat and the swivel stand we moved onto the metal. Drilling the holes was fairly accurate with the need to “adjust” only one hole. 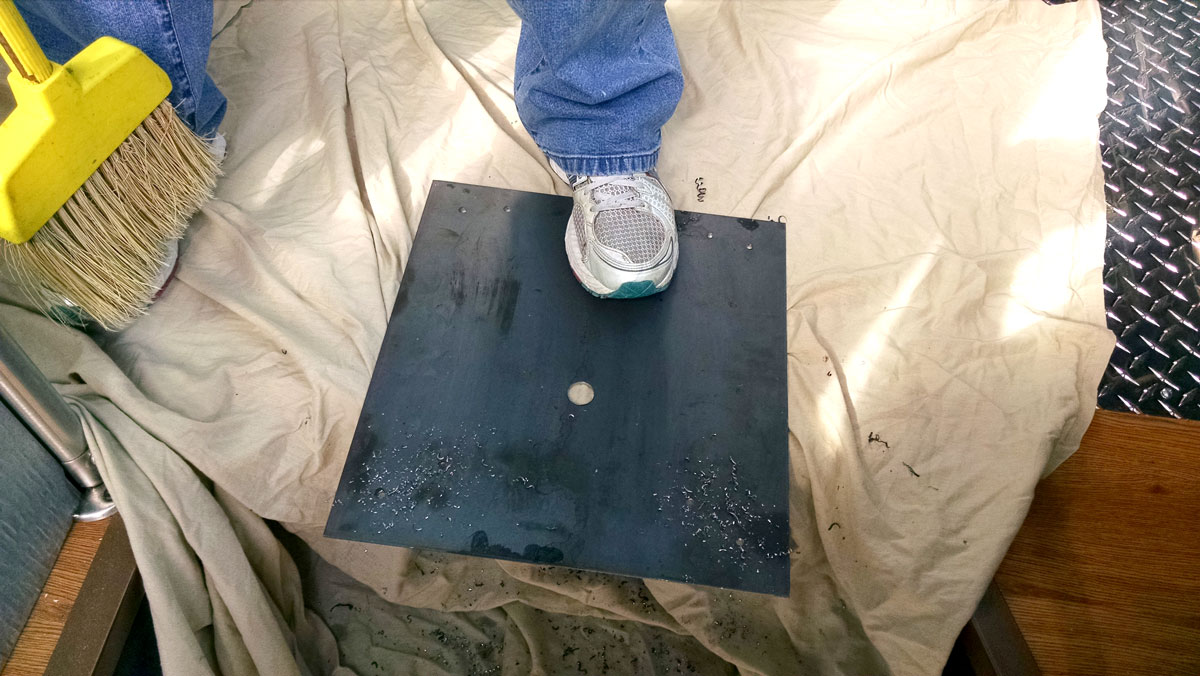 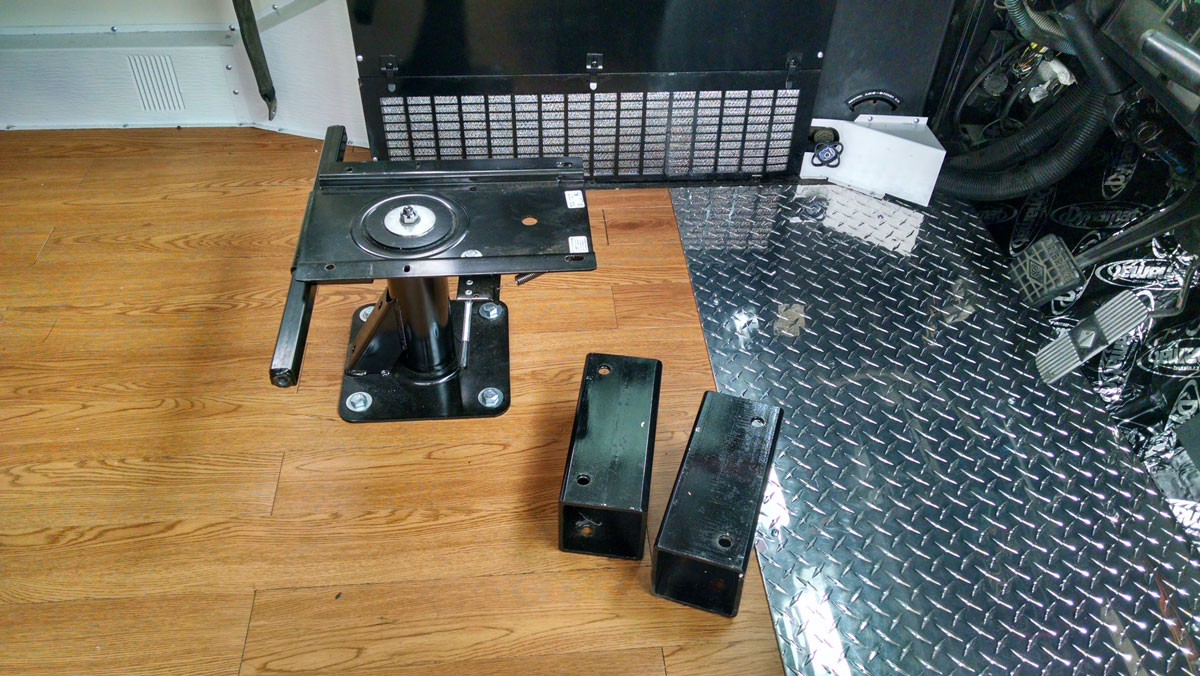 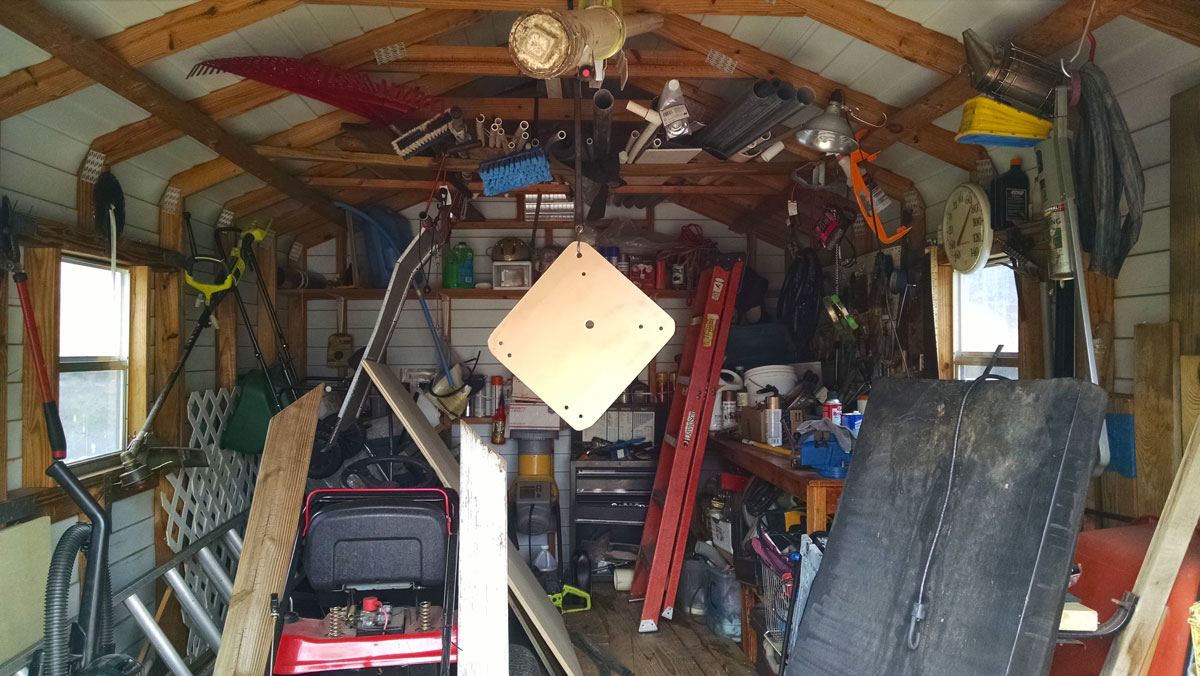 Once the metal was drilled we dry-fitted everything together to make sure it all fitted correctly. Then I used my angle grinder to cut off the corners of the plate and smoothed out the edges. I also sanded the metal to try and make it smooth and somewhat professional looking. Then I painted the plate gold to add some “Bling“ to our project. 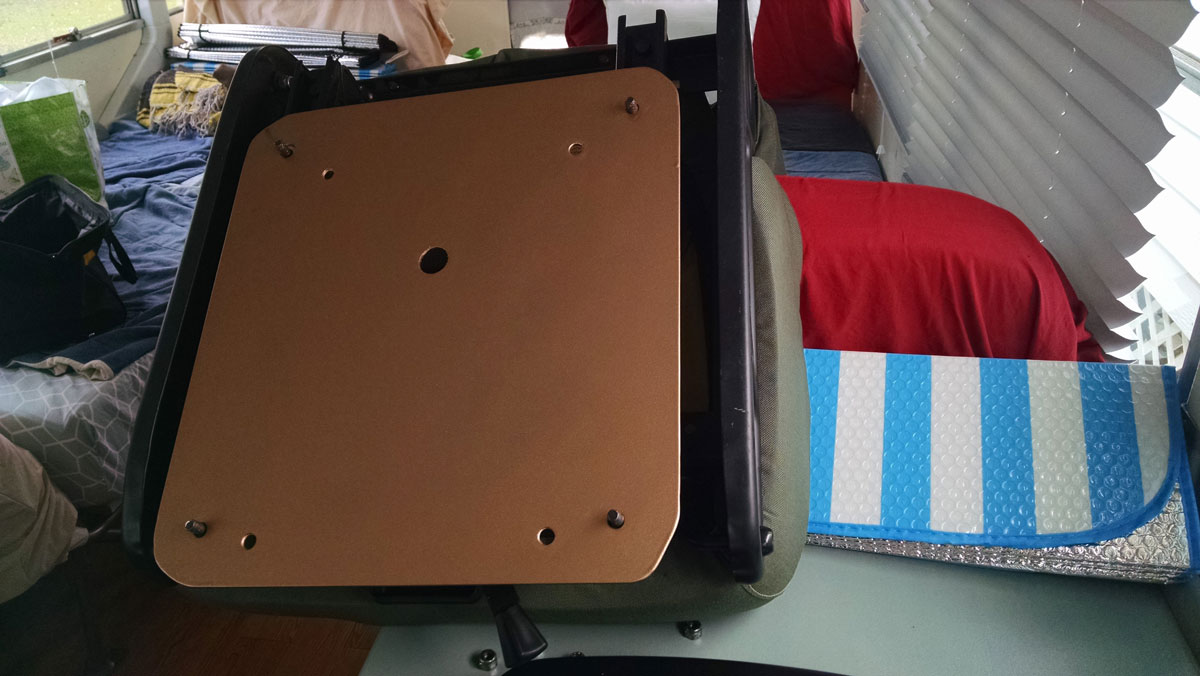 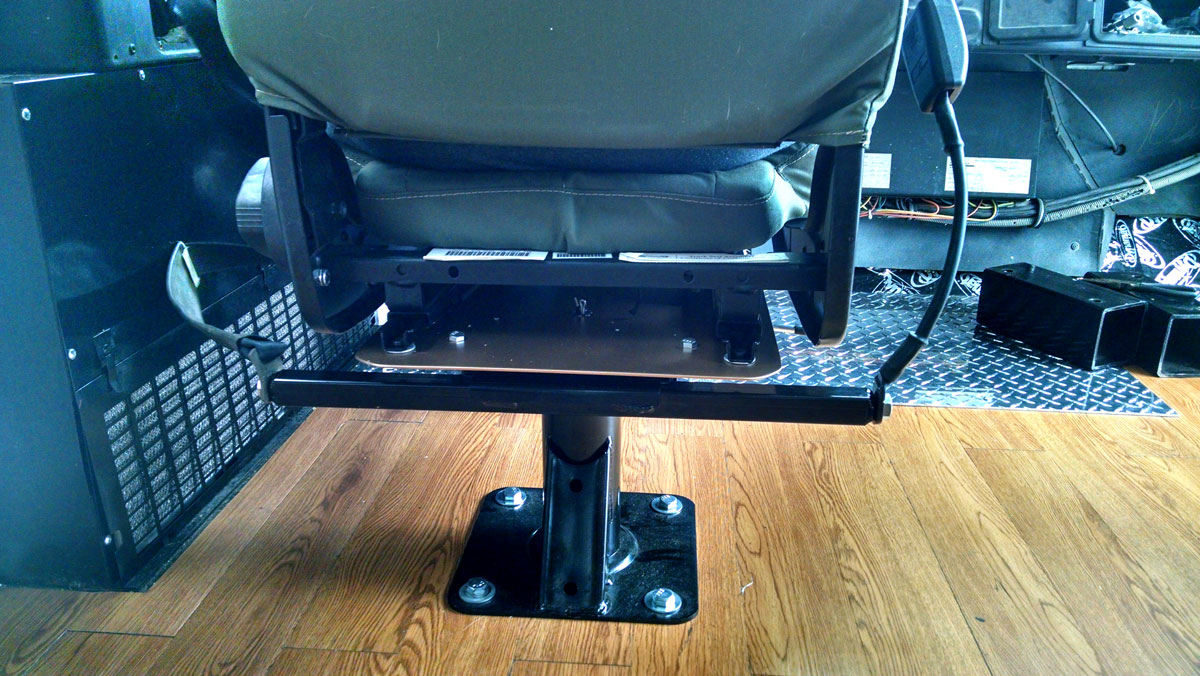 The New seat is taller than the original so we had to remove the four inches of lift we had added. That gave Ester another reason to go under the bus, she loves it under there!

With the swivel mounted on the floor and the custom adapter plate all painted up we put it all together. Like any well-oiled plan she came together without a hitch! 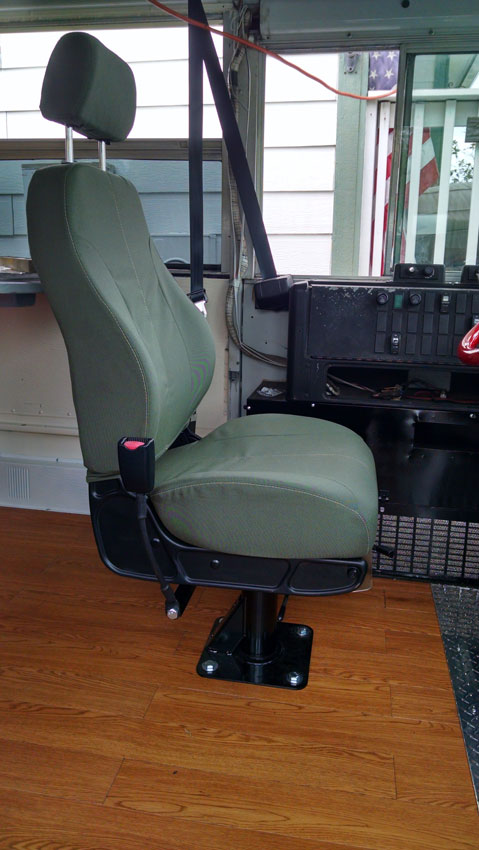 The new seat is a lot more adjustable and MUCH more comfortable. Ester created a custom seatbelt holder which gets the belt off my face when I drive. She used items she had purchased for other projects. One thing we love about the bus, finding uses for items that otherwise might be thrown away. Except for that original driver’s seat – that thing is going in the trash!

« Skoolie Security! Replacing the Windshield on a Skoolie »
comments powered by Disqus